What Do You Do On New Years Day? 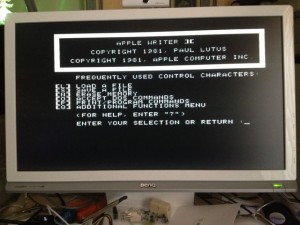 What do you do on New Years Day when you’ve got too many unfinished projects?

Start another one of course!

I’d been meaning to try out on my Apple//c the video convertor box I’d bought for my wife to connect an old PVR with only composite and component video-out to a spare old 17″ LCD Monitor in her sewing room.  Since we’ve updated that to a nice little 22″ HDTV, the convertor box has been sitting around in a draw down at my computer desk doing a whole lot of nothing.

So as I said, too many things to do, so let’s add to the list 😉 Little did I realise that this had to be one of the quickest projects I’ve ever done.

Step 1 – Find a 5.25″ floppy and whack it into the //c and boot up (Power was already connected).  One of my recent purchases had been a copy of Apple Writer ][, which just happened to be sitting on the desk waiting to be put away.   Feeling brave (stupid?) and put it in and powered up.

Step 2 – Connect up the power and Video-in from the //c PAL out, and select “D-Sub” on the Benq’s video input (usually DVI from the PowerMac QS2002 under the desk)

Step 4 – Adjust the Benq’s Display Mode to “AMA Off

” to show an “un-stretched” centred picture from the //c.

Unfortunately, the “TV BOX” did not come in a box, there is no branding on the unit, nor in the “documentation” that came with it, and I’ve had it so long, I can’t bring it up in my eBay history.

I think my success has come that when I bought my Apple //c it came with PAL output convertor which would allow it to be connected to any local TV as a monitor, and for most of its time it was connected to a Thompson Colour TV/Display via a RCA-Scart cable, so I felt that is must be outputting a decent PAL signal.

I’d still like to get a proper VGA signal convertor, as the display on my Benq is far from perfect, but at least it is easier on the eyes than the original 9″ Apple Green CRT. 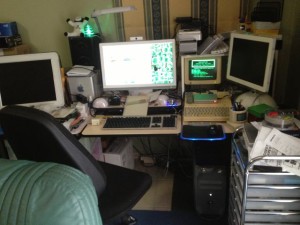 It’s a bit of a mess at the moment (understatement?), but here is a shot of my desk downstairs.  From left to right.