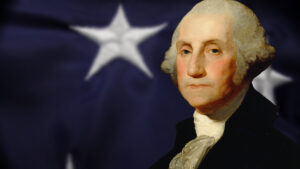 Well here we are again. I’t’s RetroChallenge time and my project will be a strategy game in the 1980s style in the likes of SSI or Avalon Hill. So why the picture of ol’ George Washington?  He’s going to be the central character of the game, the Commander-in-Chief has to rebuild the Continental Army, garner support of the States and their  Militias, battle internal strife of  those that wish to see the the newly founded Union bought down with the assistance of foreign powers.

The ink on the 1783 Paris Treaty is barely dry, can George Washington save the nation? Of course there’s a twist, I’m writing the game 😉